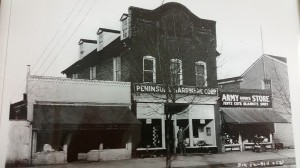 The history of Peninsula Hardware prior to 1952 is somewhat vague, but it is believed to have dated back to as early as the 1900’s. In August of 1952 Herb Watson and his brother Chuck purchased Peninsula Hardware from Roy Allen. The store was located in an 1100 foot building on the Duke of Gloucester Street near the College Shop in what is known today as Merchants Square.In 1954, construction began on the areas first shopping center. In November of 1955, the Watson brothers moved their store from Merchants Square to the newly constructed Williamsburg Shopping Center. When they reopened for business, it was in a brand new 3,469 square foot space.

Over the next several years as Peninsula Hardware continued to grow, it became apparent that it would be necessary to relocate to a larger retail space. In July of 1963, the Watson Brothers moved their store to a 7,600 square foot space located within the shopping center at the corner of Richmond Road and Monticello Avenue.

In 1981, Herb Watson bought out Chuck’s interest in the business and became sole owner.

In 1986, Herb joined Ace Hardware severing his relationship with Sentry Hardware. From that time and to this day, the store was to be known as Ace Peninsula Hardware.

In 1987, Mr. Watson realized that if his hardware business were to remain prosperous and continue to grow, he would have to enlarge his presentation. This would require him to relocate his store. In late 1987, the space once occupied by the Williamsburg Bowling Center became available and the store was once again on the move. After being closed for several weeks, the store was reopened in February of 1988. The store was now a 17,400 square foot Ace Hardware “Store of the Future” showplace. On November 1, 1989, Mr. Watson retired and sold Ace Peninsula Hardware to Terry Deaver.

Under Mr. Deaver’s leadership, Ace Peninsula Hardware continued to experienced steady growth. As sales continued to grow, it became apparent that to remain successful and to be more competitive, the business needed to invest in a much needed computer system. In 1992, Mr. Deaver purchased a “point of sale” system which led to better efficiencies in the areas of accounts payables, accounts receivables and inventory control.

In the fall of 1992, Ace Hardware Corporate honored Ace Peninsula Hardware with the first ever National Six Star Award, which was given to the top four Ace Hardware retailers for that current year.

As the Williamsburg area continued to grow, it became apparent to Mr. Deaver that the time was right to expand. In July of 1995, Mr. Deaver opened his second store which was located in the Governors Green Shopping Center, four miles from the original store. This store was a 7,500 square foot convenience type hardware store.

During the next several years both stores experienced phenomenal growth, especially in the original store. In 1997, Mr. Deaver decided to expand the current building by 5000 square feet, and at the same time, completely retrofit the entire store. The project lasted almost five months. Thanks to the efforts from the staff of Ace Corporate and from all of Mr. Deaver’s employees, the project was very successful. A Grand Reopening Sale was held in May of 1998, which proved to be the most successful business day in the store’s history.

In the fall of 1998, Ace Peninsula Hardware was once again honored by Ace Corporate. This time the store was presented with the Presidents Cup Award, which was given to the top Ace retailer for the current year.

During the late 1990’s and throughout the 2000’s, Ace Peninsula Hardware continued to grow, even as the Big Box Stores began to make their presence in the Williamsburg market. Competition had never been tougher but Ace Peninsula Hardware was able to withstand the onslaught of these large retailers through niche marketing and by providing outstanding customer service.

During the second half of 2003, Mr. Deaver saw an opportunity to expand once again and on November 4, 2003, opened a 14,400 square foot Vision 21 Ace Hardware Store. This new store is located on Warwick Boulevard in Newport News, VA. Exceeding projections, this store hit the ground running and has never looked back. It continues to do very well today.

Always looking forward and always looking for new opportunities, Mr. Deaver opened his fourth store in Hampton Virginia. Taking about fifty percent of the square footage from a vacant Winn Dixie store that was located on Nickerson Boulevard, he opened a 23,000 square foot Vision 21 Ace Hardware Store in March, 2006. This store is the largest store in the chain and is truly “state of the art”.

Peninsula Hardware has been part of the Williamsburg community for nearly 100 years and has been locally owned and operated by only three families. There are very few businesses, especially small businesses that have had this kind of longevity into today’s competitive market. We have been successful over the years because of our willingness to do whatever is necessary to meet the needs of our customers. Our loyal and dedicated staff is second to none and is always striving to provide the best customer service possible.

Realizing that our success is entirely dependent upon the communities we serve; we support such organizations as the Children’s Miracle Network, Toys for Tots, Little League, and Housing Partnership, just to mention a few.

We see a bright future ahead even as we continue to face newer and tougher competition. Ace Peninsula Hardware has always strived to be on the leading edge of hardware retailing, but we will never lose sight on what has made us successful, our customers.